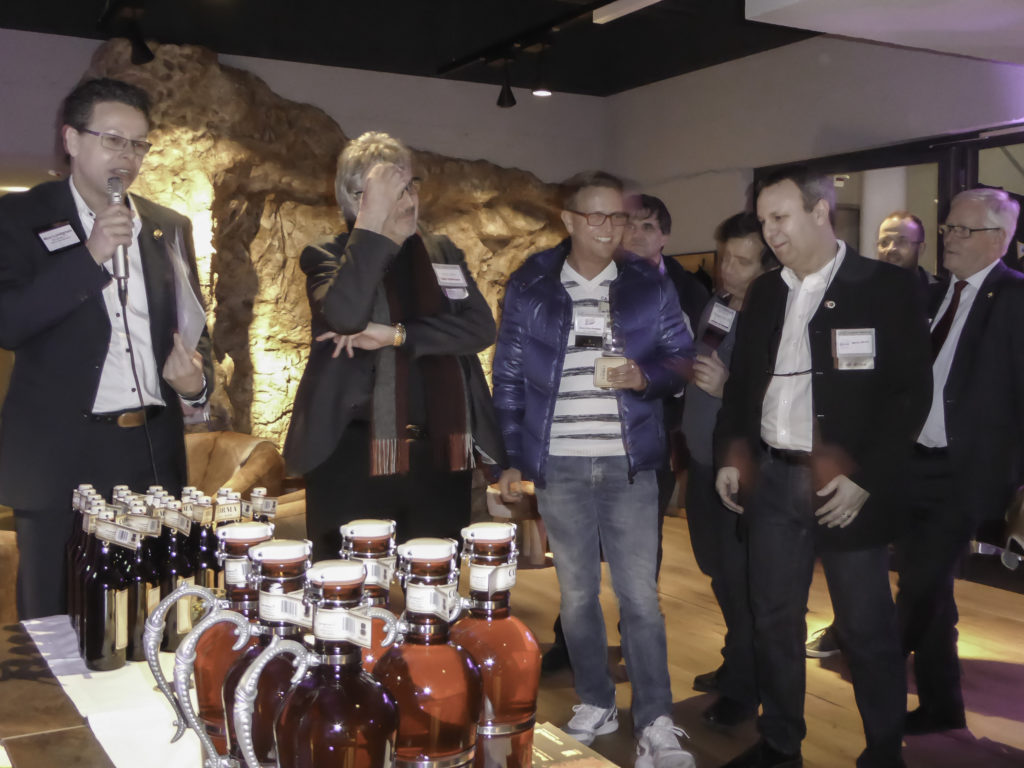 24 BNI members and 12 external guests came together on Thursday the 4th of February, to enjoy a great International Networking Week networking evening. The venue www.cinema8.ch perfectly matched our message. This event cinema has a unique concept in Europe and is the host for our BNI Chapter Douglasie. The BNI-19 event took place in the luxurious VIP First Celtic Lounge, where usually only Gold Card Members of the Cinema8 get access to.

We first enjoyed a guided tour by the GM trough all areas of the venue. After the tour, one BNI member spontaneously booked a company event for 12 people at the Cinema8.

The BNI-19 event was announced on all screens, including the huge flight screen in the departure hall. One has to know, that the venue is designed and all processes are organized as a real airport. So yes, this is the only BNI Chapter in Switzerland with it’s own airport :-). Funny enough, we observed quit a lot of other Cinema8 visitors, who stood in the departure hall, looking at the screen and asking themselves, which movie the Flight BNI-19 04032016 to BNI-2.0 would be.

Boarding of our flight in the brand new Airbus 777 (Swiss recently bought some and presented them a week ago at Zurich Airport to the public) was at 6.30pm and took off at 7pm with a personal welcome of the Captain, BNI Senior Director Nico Lundgreen, supported by his first Officer, the Chapter President of Douglasie, Marco Brivio. The first highlight was the presentation and rewarding of our Star Alliance Members, who collected the most miles during a Chapter Tour at the BNI-Challenge and –Super Challenge tour. For many BNI members, the summer holiday months July and August are low season months. Not for the 6 winners of the BNI-Challenge Tour, who visited all 6 chapters of the region, helping to connect both members and chapters during that time. Interesting enough, all of them are now either Ambassadors, Chapter Growth Coordinators or at least LT-members. Our two winners of the BNI-Super-Challenge Tour visited even 21 chapters in the same time, connecting the BNI regions of Zurich and Aargovia. Exchanging experiences, referrals, TYFTB-cards, visitors and connecting people are just a few of the benefits. Giver’s Gain at it’s best. All winners received a BNI-Switzerland „Thank You“ bar of chocolate and the book „Out of the Comfort Zone“, handed over by our National Director Peter Hermetschweiler. The two Super-Challenge winners received their price already last October, when we invited them to visit our BNI Switzerland 10th anniversary, including Founders’s Dinner, Award’s Dinner and an overnight at the Swissotel in Zurich Oerlikon, where the venue took place. All winners will get their own BNI-Success Story in one of our next SuccesNET issues.

The Brewmaster presented the beer of the Cinema8’s own brewery and answered all questions during the event. Many members bough some of the beer to take back home.

We then opened up for short presentations and lots of the participants took the advantage to present themselves in 20 seconds, telling what contacts they were looking for. Some referrals and TYFTB have been exchanged amongst the participants during the whole evening.

The next highlight was a BNI-Chapter-Team-Battle. Even though all five chapters of the region have been represented by some of their members, three chapters dominated the evening with many members. So the Captain asked the three Presidents to put together a team of 5 players during the networking time, who would later battle against the other teams. Also the external visitors had to build up a team, to later play together. They didn’t know each other but would during the open networking. All team leaders had to write down the names on the flip chart.

We then reached our flight travel height and the open networking started at 7.30pm. During that time, the flight stewards of the First Celtic Lounge served an Apéro-riche on real airline flight trolleys. We also had a Magician, Mr Mike Morgana, who is our newest BNI member of the region. He fascinated all passengers with his illusions and tricks. He is the only one in Switzerland, who can take out a real fortune of gold coins out of all body parts and clothes of a Chapter Treasurer :-). The atmosphere amongst all participants was very open, positive and also welcoming towards the external guests. Two of them announced their application on the same evening to become BNI members.

At 8.45pm it was time for the three chapter teams and the visitor team to play the battle on the 7DI Cinema. The venue offered the 3D glasses and the Game Master of the Venue introduced them to the game. The Captain has chosen the game „Wild Wild West“, because that could happen in a chapter, if the LT is not following the BNI rules and guidelines. While one team was playing together to collect the highest possible amount of points, the other teams could observe both the game and the players on the screens outside of the 7DI Dark Ride Cinema. The atmosphere had reached it’s peak now. All wanted to win, even without knowing the rewards, yet.

At 9pm the Captain announced the player with the highest rank amongst each team. They all had to step out of their comfort zone to fight for their whole chapter teams and to reach their goals. So every player received an issue of the Book „Out of the Comfort Zone“ and a BNI „Thank you“ chocolate bar. So the first lesson learned was, that with BNI everyone is a winner! Also the guests understood this and understood the message and Giver’s Gain philosophy of BNI. The Highlight then was the reward for the three chapter teams.

The team with the lowest amount of points received a CHF 100.- voucher by our National Director Peter Hermetschweiler for their next Power Meeting Day. That’s when a chapter focuses on inviting guests of a special business and the 10 minutes presenter is chosen according to the subject of this business. With this voucher, the winning chapter can invite guests for their next Power Meeting.

The team with the second highest amount of points received a CHF 200.- voucher by Peter for their next Cross-Chapter meeting. In this region we have several CCM’s during the year, where three groups hold a meeting together, leaded by all three LT’s. More cross chapter referrals and TFTB cards, but also better learning and more teamwork are just a few of the benefits. The hosting chapter invites visitors to those CCM’s to show them the benefits of BNI and we always got visitors joining BNI afterwards.

The winning team with the highest amount of points received a CHF 300.- voucher by Peter for their next visitor day. Well, I don’t have to explain that one :-).

The lesson learned by the BNI members was, that you only reach your chapter growth goals, if you play together as a team and focus on your goals. If you do that, everybody wins, has fun and the group grows together as a real TEAM.

The International Networking Week aircraft landed at 9.30pm as scheduled. But nobody wanted to leave the plane! The passengers continued to network, having lots of fun and making new contacts. The last ones left the airport at 01.00 am, together with their Captain Nico Lundgreen. Meanwhile our BNI airline has received many positive feedbacks, both from members and visitors. It was the first INW-event of this region and all participants requested such a cool event again for 2017. They all agree, that this region has made a huge step ahead towards “Giver’s Gain“ and the new 3+1 mindset of BNI: keeping good members, grow chapters, create new chapters and tell stories. 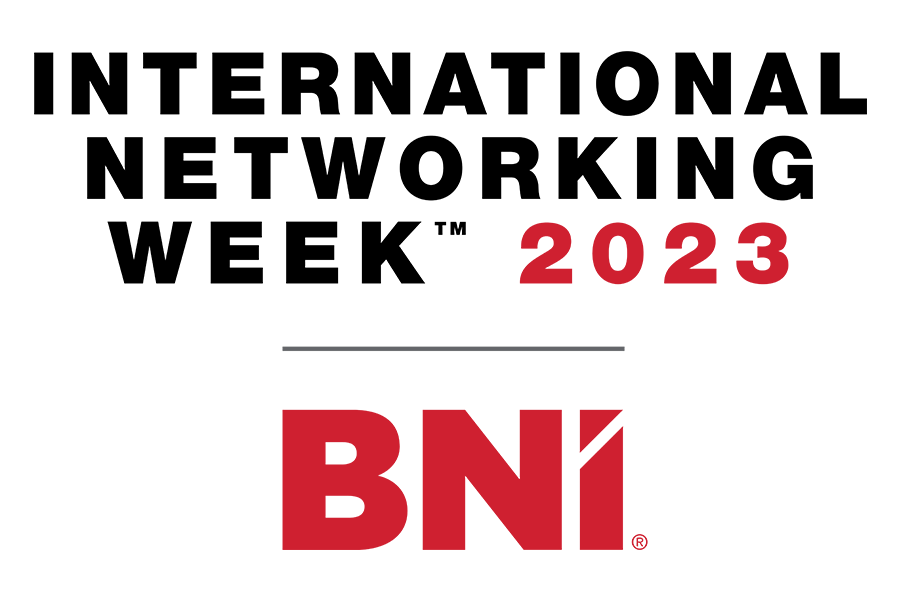