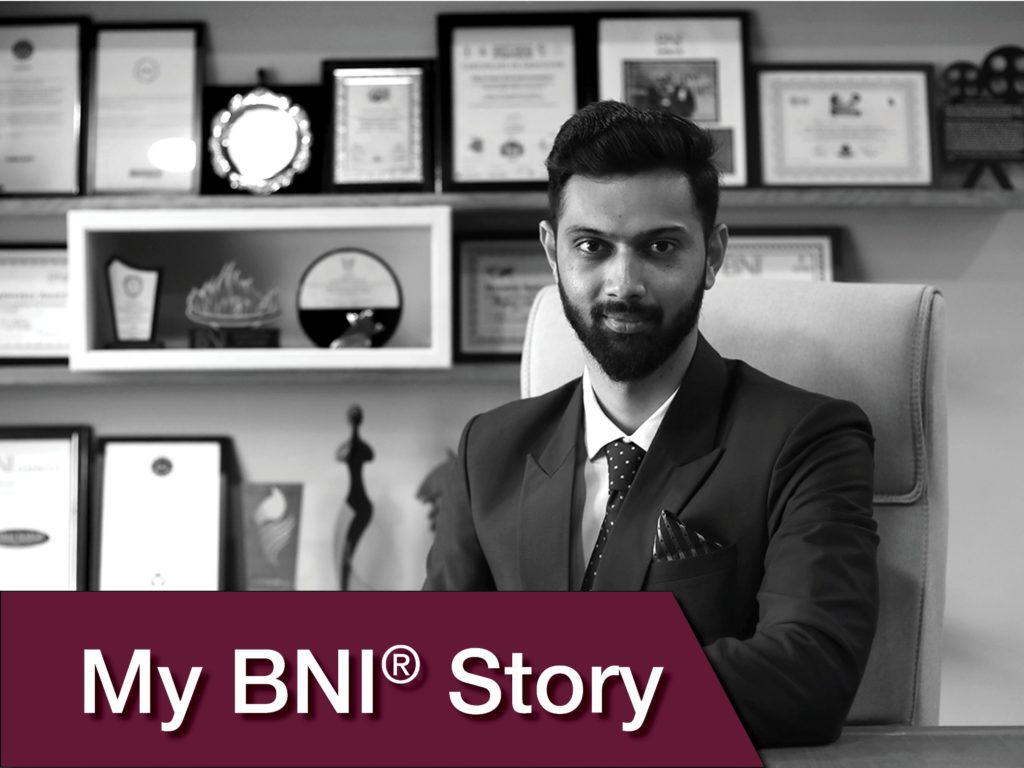 Rohan was also recently announced as the Winner of BNI’s 2019 Annual Video Contest.

Rohan Jardosh is a Director with Gennext Studio, a Film Production company based out of India which provides stunning visuals for Short Films, Corporate Films, Events, Weddings and Documentaries. The production house is registered with the Western India Film Producers’ Association (WIFPA), which is considered the leading film producers association. Gennext has covered more than 120 Events & Concerts, 80+ Corporate Shoots, 150+ Photoshoots, and 30+ Weddings.

What brought Rohan to BNI?

In 2011, Rohan’s passion for film making and acting took him to Mumbai. While there, he was given the opportunity to work for some famous film production companies. However, he felt young and directionless. Through his relationship with a BNI Member, Hitesh Patel, he was encourage to move back to Ahmedabad, India and build something of his own. With one camera to work with, and a passion to rival anyone, he began to position himself as a reliable and trusted filmmaker. Through Hitesh, he was introduced to the world of BNI and in 2014, joined BNI Prometheus. With a positive attitude and willingness to create opportunities for others, Rohan became a dedicated Member and has now been with BNI for close to 5 years.

As a Member, Rohan began to understand the influence that he could have as a trusted mentor. That let him to take on the role as a Senior Support Director Consultant. In this role, Rohan supports the BNI Ahmedabad West region.

How has BNI led Rohan to unparalleled Success?

Through the widespread promotion of a launch video that Rohan created for BNI Prometheus, he became the go-to regional event director for BNI Ahmedabad. In this role, he’s covered more than 35+ Chapter Launches and numerous visitors days. This position also provided him the opportunity to oversee the region’s three annual events: BNI Symposium, BNI Sports League and BNI Garba.

BNI has propelled Rohan from a one person start-up to an ever expanding enterprise of 18+ team members that occupies a 5,000 square foot studio. The best part… he found his first investor within his chapter!

According to Rohan, “I am proud to share that I have invested and partnered with 3 different BNI Members. In 4 years, I’ve gone from a start-up to a mentor and now other Members can share in my success!”

“My strong belief in the philosophy of Givers Gain has given me visibility and the ability to attract investment towards me dream project, which is producing and directing a feature film. There is always one great thing that happens in your lifetime, and mine is BNI…”

Rohan, who was one of 74 participants in the year’s annual video contest, was recently selected the winner with this fantastic submission, which can be seen below. Rohan will be recognized at BNI’s 2019 Global Convention, along with our 2 other finalists, Graham Nash of BNI UK and Nicolas Olivier of BNI French Speaking Belgium.

A Quick Thank You from Rohan

First and foremost, I would like to thank Mr. Hitesh Patel who introduced me to the world of BNI. Secondly, our Executive Directors, Yash Vasant and Nitish Agarwal, without whom this journey would not have possible. I would also take this opportunity to thank Dr. Ivan Misner who created an organization that allows us to grow, teach and nurture while learning to become better a entrepreneur and person.

I would also like to offer each new Member a quick word of wisdom. Invest in your first year of Membership and work hard to absorb the culture and core values of BNI. If you do so, I guarantee that your success story will be one that inspires others along the way.