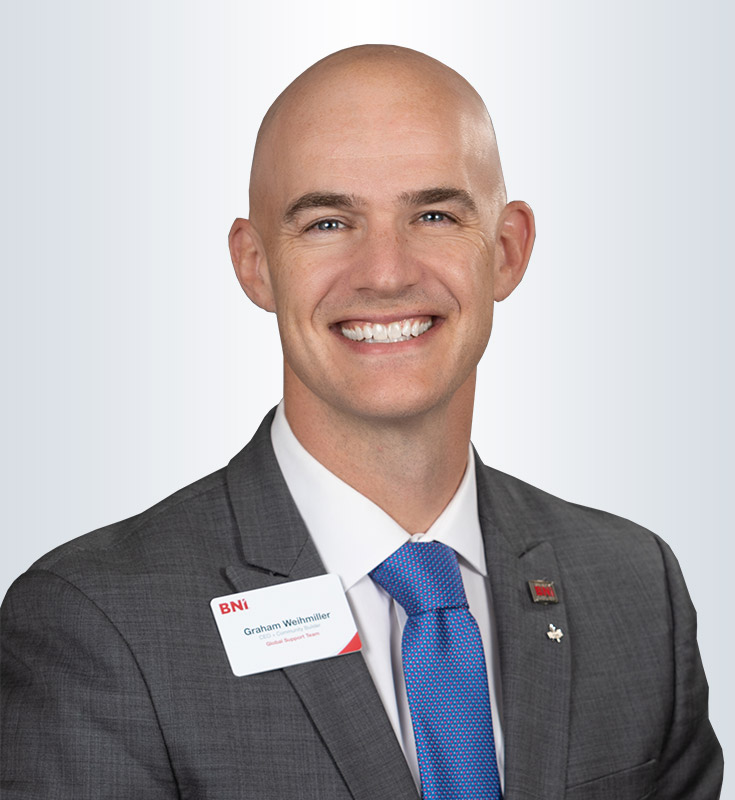 Graham Weihmiller joined BNI in 2014 to help execute BNI’s strategic plan that includes operational enhancements, continued membership growth, and ongoing global member expansion. Graham is passionate about building successful service organizations that have a remarkable value proposition and a positive social impact. Prior to BNI, he served as the CEO of a 32-year-old nationwide franchisor of homecare services. While there, he was a founding director of a foundation that provides homecare to those who cannot afford it. His previous leadership experience includes roles with Pioneer Equity Partners, American Franchise Company, Bank of America, Booz Allen and JP Morgan.

Graham speaks frequently on entrepreneurship and franchising and has recently been on panels at Harvard Business School, Stanford University, and Georgetown University. He received his MBA from Harvard Business School and his BBA from the College of William & Mary. He has done subsequent executive education with Harvard Business School in India. He is a Certified Franchise Executive and active with the International Franchise Association. Graham is trained in Lean Enterprise, Process Excellence, Design for Six Sigma, and is a Six Sigma Black Belt. He is an active member of the Young Presidents Organization (YPO) and the Harvard Business School Club of Charlotte, where he was formerly the Club president. He currently serves on the BNI Foundation Board of Directors.