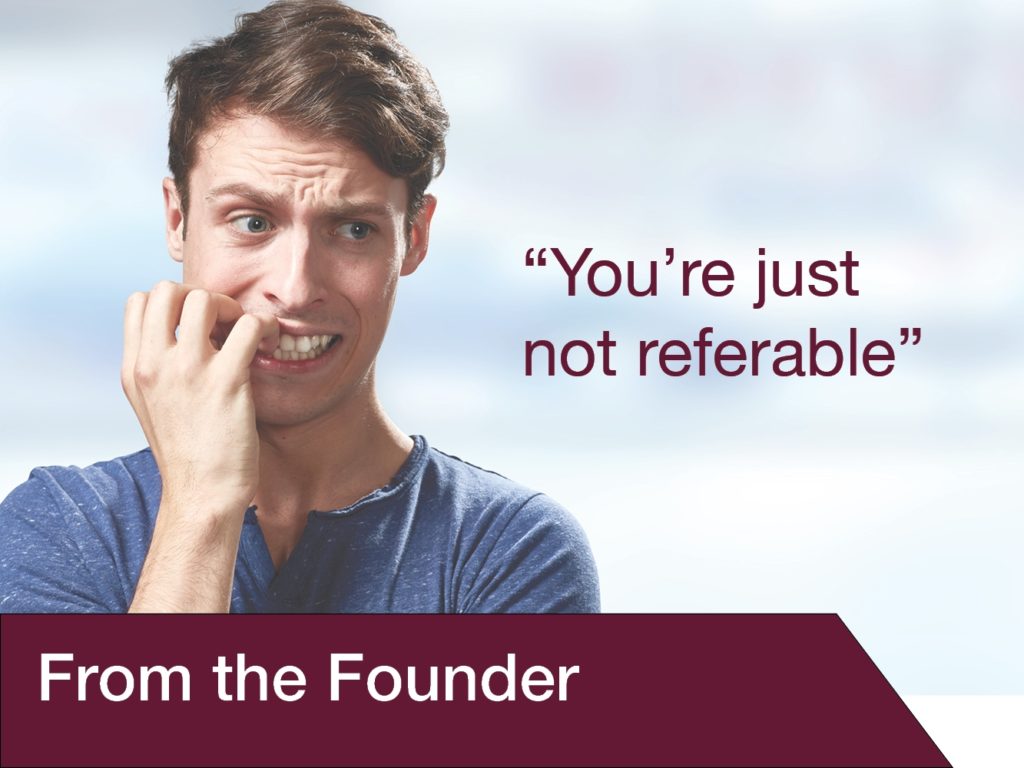 A friend of mine in BNI recently told me a story about her early days in the organization.  Her name is Meaghan and when she joined the group, she had just come out of the construction management industry.  Although she was now working as a business coach, she was still dressing to fit in at a construction site.  Her entire wardrobe, according to her, was casual shirts and khaki pants which was well-dressed within the context of a construction site.  One day two of her fellow members conducted a little “intervention.”  They sat down with her and said, “we want to help you because – right now, as a business coach – you’re just not referable!  You don’t present a professional image.”  They went on to say that they believed that she was really good at what she did because they have seen her in action.  The problem was that she made a marginal first impression when she showed up at a potential client’s office.

Now whether we agree with this intervention or not – one thing is definitely true.  People’s “feelings” are their reality and these individuals felt they couldn’t refer her to their business clients because of the first impression that Meaghan was giving.  When someone gives a referral, they give a little bit of their reputation away.  Meaghan’s potential referral partners understood that if they referred her and she didn’t look the part, she might not get the business and that the referral recommendation would potentially reflect poorly on them.

Meaghan told me that she felt that her credibility as a coach came exclusively from what she knew and what she was talking about not other things like the way she dressed.  Although she was really shocked by the statement, she took a moment and gave an absolutely brilliant response.  She said, “Okay, so what are we going to do about it?”  She went on to say that if they were going to drop this bomb on her – they couldn’t just turn and run for the hills.  They had to help her out.

The sheer fact that she had the clarity of mind to not get defensive and listen to the feedback that was being given her was an absolute testament to her “walking the talk” as a coach.  This openness to feedback allowed her to address the matter effectively and gave permission to her two potential referral partners to really help her.  The two women that sat down with her then connected her with a cosmetic consultant and a hair stylist.  One of the ladies even let Meaghan go shopping in her on closet to find clothes that fit the role she now had as a professional business coach.

What I’d like you to think about is: “How referable are you?”  I certainly don’t know your situation but I would suggest to you that unless you are getting more referrals than you can possibly handle, you may not know either.  So here’s the scary part – ask some people you know and trust if they would 1) give you an honest answer to that question, and 2) be willing to help you if they have suggestions.

Meaghan likes to say that: “With a great network, anything is possible. The big contact that you are looking for, the golden goose, the dream referral.  All of it can happen – if you are open to feedback.”  Meaghan was open to feedback and her life has changed because of it.  She’s now an incredibly successful business person handling serious project management assignments that literally impact hundreds of thousands of people.  Based on results, that brief meeting had a life-long impact on her life.  Meetings like this can do the same for you.  So, spend a little time and find out just how referable you are.